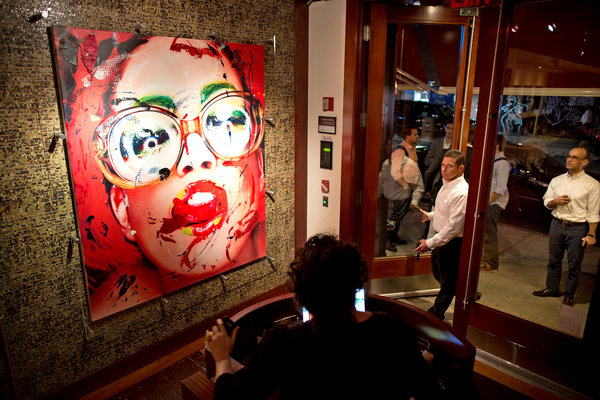 Costata’s lobby. The restaurant occupies the same place on Spring Street where Fiamma once stood, and where the 29-year-old Michael White once worked as executive chef.

So this is where he decides to bring us: back to the same place on Spring Street where it all started. The year was 2002, the restaurant was called Fiamma, and he was just another hungry 29-year-old chef from the Midwest. We didn’t know yet that his name was Michael White. We just knew that when he cooked Italian food, he could make us forget about all the others for a while.

Now he has bought the place and renamed it Costata. This time around it’s a steakhouse. He is credited as the chef and owner, with PJ Calapa as the executive chef and Robert Truitt in charge of the dessert menu. But he definitely wants us to remember the early days here, and maybe reassure us that even though he’s been spending a lot of time on the road lately, we still mean something to him.

All those Foreigner and Stone Temple Pilots songs aren’t helping to set the mood. And those huge white cotton chandeliers with accordion folds are distracting. They look like air filters for monster-truck engines.

The votives are a nice romantic touch. Except those aren’t candles; they’re flame-shaped light bulbs programmed to flicker on and off. They fit right in with the jokey space-age décor at the Butterfly, his new bar in TriBeCa. But on Costata’s white tablecloths, they look cheap.

And these teapots are sleek and shiny, but he’s sending them out two at a time, one with a tea bag and hot water, the other with just hot water, because a single pot won’t fill a teacup. He wouldn’t buy us teapots just because they were on sale, would he? Or is this ... a regift?

But tonight let’s stay focused on the good times. To remind us, he’s making the garganelli he used to do at Fiamma, those ridged quills with peas, pancetta and, oh, that truffle cream. Wow. As indecently rich as we remembered it.

This spaghetti with clams almost eats like carbonara, with its sticky yellow-tinged sauce that clings to the noodles. The casarecci, bent scrolls blackened with squid ink, have a powerful oceanic undertow that pulls the sweet shrimp and sepia along in the current.

For a minute, we’re wondering if he’s laying it on a bit thick, showering shredded fontina over the oxtail ragù with cavatelli. Then we take another bite and decide that when somebody makes pasta as wonderful as this, there are some questions you just don’t ask. Though we do want to know how many people take the menu’s advice and order pasta as a side dish with steak. Costata’s pasta shouldn’t have to compete with anything.

We should know. We’re never sure we’re getting his full attention anymore. He’s a blur, opening three restaurants since May. He didn’t seem to be trying very hard to make us happy with his last one in New York, Nicoletta. Now he’s got something going on in Hong Kong, and in London. And who knows what he does at those two places in New Jersey.

If he wants to persuade us he’s not spread too thin, some of the cooking at Costata isn’t helping his case. Raw branzino is obliterated under a black mash of salty taggiasca olives, although what little of the fish’s flavor comes through suggests that obliteration may be the right call. Potatoes puréed with barrels of melted butter and Parmigiano-Reggiano taste great, but they are gluey and oafish.

The brilliant-red coral butter painted on a split and roasted lobster the size of a dachshund looks stunning, but it’s irretrievably salty. And the generic red-meat flavor of lamb chops is a $49 shock.

Some of these dishes have a coarseness that wasn’t there when we first met, or even later on, when he took us to Convivio and Alto and Marea. And the relationship feels a little one-sided now. If we had given him $59 for a bone-in rib-eye back when he was so eager to impress, would he have turned around and asked for another $3 for compound butter and $4 for sauce?

Or maybe our memories have gone all misty and watercolored.

Oh, now he’s going to try to sweep us off our feet again with crudo, the way he did at Marea. We’ve seen this move before.

And you know what? Apart from that sad branzino, the old moves still work. Those beautiful red prawns with lemon, olive oil and a prawn-head stock are extraordinarily fine. So is the fluke, sparkling beside the green divots of Castelvetrano olives and slow-roasted grape tomatoes. And these thin disks of sea scallop, so sweet and pure on a blanket of puréed celeriac, with diced celeriac pickle and fresh, herbal celery leaves — they’d destroy our resistance even without the head-filling taste of black truffles in the vinaigrette.

All right, the guy’s a magician with seafood, too. Roasted langoustines had better be exceptional at $19 apiece. They are. We’d come back for a second taste of the chilled lumps of tender lobster with strips of honey-coated guanciale cooked like bacon and a thick cocktail sauce that delivers a Bloody Mary’s loving slap to the head.

The truth is that we always loved his gut instinct for richness and fresh, bright flavors. We don’t really need him to cook us a steak. But by now we’re ready to be won over.

The filet mignon delivers all the tenderness we want and more flavor than we expect. Pink within and a rich caramel brown on top, the veal chop is everything we ask from that cut. The pancetta-black pepper sauce takes to it the way a cat takes to an empty lap.

The bone-in strip is a very good piece of beef, though it doesn’t have the intensity of the best dry-aged meat. Neither does the 40-ounce porterhouse, though big enough for at least two people, for $116. Called the Fiorentina, it’s a handsome carnation-pink all the way through, but it has no crust to speak of and is lukewarm on arrival. It’s all steak and no sizzle.

For sizzle, we’ll spend $2 more to get the Costata, a 44-ounce rib-eye on the end of a theatrical curve of roasted bone. Bathed in mouth-coating melted fat, the meat is so tender beneath its dark crust that slicing it makes you feel like a bully. This steak alone is a reason for the restaurant that it’s named after to exist.

When the meal ends, Mr. Truitt is a master of extending the good feelings and then building on them, with desserts that are quietly sophisticated without flaunting their cleverness.

Things aren’t the way they used to be. They’re not quite the way we pictured them in the beginning. But give us the cavatelli and a rib-eye, or a few langoustines, and for tonight, we’ll be happy.

ATMOSPHERE The downstairs dining room is sedate; upstairs is livelier.

SERVICE Not informal, but not stuffy, either.

DRINKS AND WINE Martini menus are often a danger sign; Costata’s is worthwhile. The wine list is more imaginative than most steakhouses’.

WHEELCHAIR ACCESS One dining room is at street level; another, and accessible restrooms, are served by an elevator.